Everyone loves chocolate, and these popular candy bars are no exception. In our list of the most popular chocolate bars in the world, we have compiled a list of some popular favorites that will satisfy any sweet tooth! From Hershey’s to Kit Kat, there is a bar of chocolate for everyone.

The Most Popular Chocolate Bars

To determine which are the most popular chocolate bars in the world, we polled a large group of people and asked for their input. These chocolate candy bars are popular because of their taste, convenience and price. You can purchase most of them at your local market or grocery store, although some can be found only in specific countries.

What Are the Different Types of Chocolate Bars?

One of the most popular types of chocolate bar is dark chocolate. This type of chocolate comes from cocoa beans that have been roasted until they release their natural oils and then ground into a liquid paste called “chocolate liquor”. The mixture is then poured in molds and allowed to harden. Dark chocolate is typically 60%-70% cocoa solids, making it a healthier choice than milk or white chocolate.

Milk chocolate gets its sweetness from sugar and milk powder. The chocolate liquor is mixed with whole milk, cream and/or condensed milk before it is poured into molds for hardening. This type of chocolate bar typically has between 25%-35% cocoa solids, making it sweeter than dark or white chocolate.

White chocolate actually doesn’t contain any chocolate liquor at all. It contains cocoa butter, milk solids and sugar, with vanilla sometimes being added for flavor. White chocolate is typically 20%-30% cocoa solids, and sweeter than milk or dark chocolate bars.

The History of Chocolate Bars

The history of chocolate goes back to the Aztecs who called it the food of the gods. They started using cacao beans as a form of currency.

The Aztec people chewed on the beans until they became soft and made them into a drink called xocolatl. This drink was made with cocoa powder, water, cornmeal or maize flour, vanilla extract and chili peppers.

Chocolate bars as we know them today were first invented in 1847 by John Fry of chocolatier J.S. Fry and Sons. In 1887, Swiss chocolate maker Daniel Peter created milk chocolate by adding condensed milk to chocolate liquor. The popularity of chocolate bars has only continued to grow since then!

Today, there are many different types of chocolate bars, each with their own unique flavor.

Read on to discover your new favorite chocolate bar!

Snickers Bars are a classic candy bar that combines chocolate, nougat, peanuts, and caramel. The Snickers Bar was first introduced in 1930 by Mars, Inc.

The Snickers Bar takes its name from the favorite horse of Ethel and Frank Mars, Snickers. It has since become a staple of the American candy landscape, with more than 15 million produced every day.

This popular chocolate bar from Nestlé is known for its distinctive two or four finger shape. Kit Kat Bars are made with crispy wafer cookies and coated in smooth milk, dark or white chocolate.

The Kit Kat was first introduced in the UK in 1935 and has since become a popular worldwide favorite. Since 1958, the bar’s slogan in the UK is “Have a break… have a Kit Kat”.

Introduced by Frank C. Mars in 1923, this chocolate bar has a light and fluffy texture, with a delicious milk chocolate flavor and nougat filling. In the United States, Milky Way Bars have a creamy caramel topping.

However, the global version of the Milky Way Bar doesn’t contain caramel. It’s somewhat confusingly sold as the 3 Musketeers Bar in the United States and Canada.

Here’s what the global Milky Way Bar packaging looks like.

In 1932, the Mars Bar was launched in the UK. Later it became very popular all over the world under different names.

The UK version of the Mars Bar consists of nougat and caramel, covered with milk chocolate. It has a unique taste that separates itself from other chocolate bars.

Mars Bars are made in over 100 countries and sold around the world. The US version of the Mars Bar doesn’t contain any caramel.

In Scotland, you can buy infamous deep fried Mars Bars from quite a few fish and chip shops – definitely an acquired taste!

Cadbury Dairy Milk Bars are made with creamy Cadbury milk chocolate and whole hazelnuts. They’re one of the most popular chocolate bars in the UK.

Cadbury Dairy Milk was first launched in 1905 in the United Kingdom by George Cadbury Junior. The famous chocolate bar contained a higher proportion of milk than any other bars on the market at the time.

The daughter of a customer came up with the name Dairy Milk. The Cadbury Dairy Milk Whole Nut version was introduced in 1933 and has been popular ever since.

An Almond Joy chocolate bar is a type of candy bar made by the Hershey Company. It consists of coconut flakes, sugar, corn syrup, whole almonds and milk chocolate.

The Almond Joy Bar was launched by Peter Paul,Inc. in Connecticut in 1946. Peter Paul was acquired by Cadbury in 1978 and later purchased by The Hershey Company in 1988.

This popular chocolate bar is a combination of crispy rice and 100% milk chocolate, with a taste that’s absolutely irresistible! It has been around since 1938, but people continue to love it year after year.

In the United States, the Crunch Bar is produced under license by Ferrara Candy Company, a subsidiary of Ferrero. In the rest of the world, it’s made by Nestlé themselves.

There are around 420 pieces of rice in the average Nestlé Crunch Bar. It takes approximately 50 minutes to make one of these bars.

This triangular-shaped Swiss chocolate bar is popular all over Europe. Introduced in 1908 by Theodor Tobler, its name is a play on his surname and the Italian term for almond and honey nougat.

The unique shape is inspired by the Alpine peaks of Switzerland. Look closely at the famous yellow packaging and you’ll spot a bear on the mountain side.

The Toblerone Bar has a honey and almond nougat filling that’s covered in milk chocolate. These days you can even buy customized Toblerone Bars, a fun gift!

This popular candy bar is made by Mars, Inc and it’s popular in America, the United Kingdom, and Ireland. It has a shortbread biscuit center that’s covered in caramel and then coated with milk chocolate.

There are many different versions of Twix such as Twix Miniatures in Europe and Ice Cream Twix bars.

Mr Goodbar is a kosher milk chocolate bar that contains peanuts. It was first created by Milton S. Hershey in 1925.

The Mr. Goodbar candy got its unusual name as Mr Hershey was hard of hearing. A chemist who helped to make the bar said that the entrepreneur heard someone say Mister Goodbar, when they were actually saying that it was a good bar ;-).

The dark chocolate Lindt bars are popular for baking, due to their high cocoa content. The large format Lindt Gold bars are also in demand. Created from original Swiss recipes, they come in a variety of flavors such as Bittersweet and Milk chocolate.

Introduced in 1981 by The Hershey Company, Skor Bars bear more than a passing resemblance to Heath Bars, launched in 1914 by L.S. Heath. Both candy bars are now produced by Hershey.

The main difference is that Skor Bars contain butter toffee while Heath Bars contain English toffee. The Skor Bar is also a bit thinner than the Heath Bar.

Taking its name from the novel The Three Musketeers by Alexandre Dumas, this popular chocolate bar is produced in the United States and Canada.

3 Musketeers was first created by Frank C. Mars in 1932 as a three piece bar with vanilla, chocolate and strawberry. It was intended to be shared with friends, being one of the largest chocolate bars.

These days, the 3 Musketeers Bars just contain chocolate and are similar to the global Milky Way Bars.

Originally a milk chocolate bar with vanilla flavored nougat, there are now chocolate and strawberry Charleston Chews as well as miniatures. Many people like to eat this candy bar frozen.

With an iconic logo, this company is one of the best-known makers of popular chocolate bars in America. The company was founded by Milton Hershey, who launched his famous Hershey’s Chocolate Bar recipe in 1900.

Hershey calls it The Great American Chocolate Bar. An almond version was introduced in 1908.

Hershey’s cookies and Hershey Kisses are other popular sweet treats. Milton Hersey’s birthday was on September 13, which is International Chocolate Day.

Although more of a bell shape than a rectangular bar, we’ve included Reese’s Peanut Butter Cups due to their popularity. They’re particularly in demand for Halloween.

This candy bar was first introduced to the public in 1928 by Harry Burnett “H. B.” Reese for people who loved chocolate and peanut butter. The cups are made with creamy milk chocolate and Reese’s famous peanut Butter filling.

This popular chocolate bar is not named after Babe Ruth, the iconic baseball player as you might have thought. The Baby Ruth candy bar is actually named after Ruth Cleveland, the daughter of President Grover Cleveland.

This chocolate bar debuted in 1920. In 1923, the founder Otto Schnering dropped Baby Ruth bars equipped with mini parachutes over cities in forty states.

It has since become popular among American audiences for its delicious blend of nougat, caramel, and peanuts covered in milk chocolate. The iconic chocolate bar features in The Goonies movie released in 1985, with Sloth sharing a Baby Ruth Bar with Chunk.

In Conclusion: The Most Popular Chocolate Bars

So now that you know all about these popular candy bars, why not try some out for yourself? Whether you’re a milk chocolate fan or prefer the slightly bitter taste of dark chocolate, there’s something to suit everyone!

Which of these popular chocolate bars is your favorite? Let us know in the comments below!

Read next: Fascinating Facts About Chocolate | How Many Carbs Are There In Chocolate?

Suze is a keen home cook who loves to share recipes from her travels here and on Instagram and Pinterest. She also has a popular lifestyle blog.

7 thoughts on “17 Most Popular Chocolate Bars in the World” 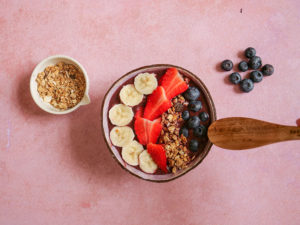 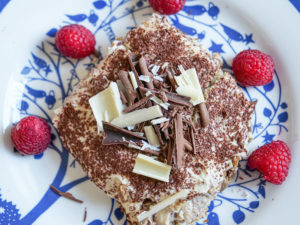 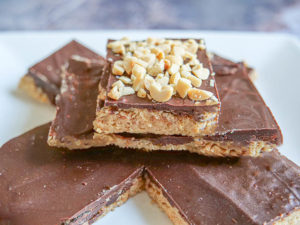